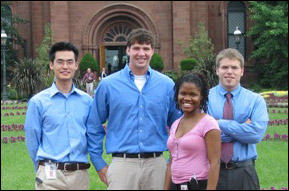 The Office of Police Complaints (OPC) recently welcomed its newest class of interns, who will be working for the agency during the summer of 2005.

OPC's internship program has been an excellent way for the agency to maximize its resources by engaging talented students in the agency's work, while giving them valuable training and practical experience in exchange. The program has also been an important recruitment tool for the agency, with two former interns currently employed by the agency as investigators.

Since the internship program began, the agency has attracted many outstanding students, mostly from DC-area schools. Through the summer of 2005, over 30 college students and 12 law students have participated in the program.

For information, select our website information about internship opportunities at OPC, or contact the agency's administrative officer, Stephanie Banks, at (202) 727-3838.