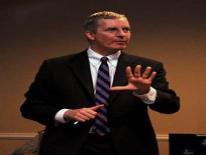 Kurt Vorndran, who served as chair of the PCB from January 2015 to October 2016, is a legislative representative for the National Treasury Employees Union (NTEU). Prior to his work at NTEU, Mr. Vorndran served as a lobbyist for a variety of labor-oriented organizations, including the International Union of Electronic Workers, AFL-CIO (IUE), and the National Council of Senior Citizens. He also served as the president of the Gertrude Stein Democratic Club from 2000 to 2003, and as an elected Advisory Neighborhood Committee (ANC) commissioner from 2001 to 2004.

Mr. Vorndran was recently appointed to the newly formed DC Police Reform Commission and serves on the Commission’s Committee on Reforms to Metropolitan Police Department Practices. In addition, he is the treasurer of the Wanda Alston Foundation, a program for homeless LGBTQ youth.

Mr. Vorndran received his bachelor's degree from the American University's School of Government and Public Administration and has taken graduate courses at American University and the University of the District of Columbia. He was originally confirmed by the Council on December 6, 2005, and sworn in as the chair of the PCB on January 12, 2006. In 2011, Mr. Vorndran was re-nominated by Mayor Vincent Gray and confirmed by the Council, and sworn in on January 5, 2012 for a new term ending January 12, 2014. He continues to serve until reappointed or until a successor can be appointed.