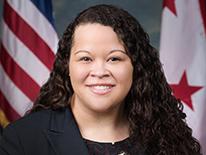 Ms. Howard earned a law degree from the Widener University School of Law, a master’s degree in business administration from the University of Maryland University College, and a Bachelor of Arts degree in sociology with a concentration in criminology and a minor in Spanish from Louisiana State University.